How I Met Your Puppy

“Our dog didn’t get the memo.” The man sat at the head of the dining room table, and the woman, having brought me a glass of water and placed a coaster on the table in front of me, sat herself across from me, both of them agitated. I sipped my water, set the glass on the coaster, and glanced at the cutie behind the baby gate, the cause of all this distress. 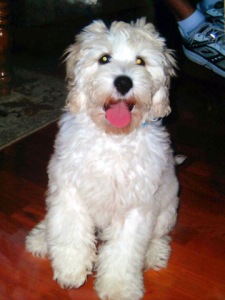 There sat the most adorable off-white young dog, his entire body a tumble of touchable, soft, little curls. For a young dog, barely fifteen months old, he sat strangely still, almost like a stuffed toy the kids had left behind. He was unnaturally expressionless, not even wiggling his tail. He just sat stiff and observed, as if miffed that things had come to this.

“The one that says a dog is man’s best friend.” The frustration in Robert’s voice was unmistakable.

“Tell me what happened.”

“I headed to bed where Dusty was sleeping next to Susan,” he said. “He always refuses to move out of my way when I try to get into bed, but this was the worst—he attacked me!”

Eyes filling with tears, Susan picked up the story with terror in her voice. “Dusty attacked. He tore Rob’s pajamas. He lunged at him again and again, biting him on his hips and arms.” Susan’s arms flailed as she described the trauma. “I flew out of bed, grabbed a pillow, and forced it between them. Dusty started tearing apart the pillow. He was like Cujo! He was savage! We couldn’t stop him!” She cried openly now. “Feathers were flying everywhere! I reached around the pillow, grabbed Dusty’s collar, and dragged towards the bathroom. He kept snarling and jumping at Robert.

Once I got him alone in the bathroom with me, he calmed down. I let him go, and he looked up at me as if to say, ‘Aren’t you proud of me?’ I was a wreck!” She wiped her eyes with her fingertips. “Who’m I kidding? I’m still a wreck.”

I glanced at the cute, curly-haired pup. Throughout the entire account of the violence he’d perpetrated, he just sat quietly, as if listening intently and agreeing, “Yes, that’s exactly how it happened, but as soon as you hear my side, you’ll understand my actions were perfectly justifiable.”

“Once he was settled,” Susan said, “I slipped out to get his leash, came back, and clipped it to his collar.”

“Good thing, too,” Rob said. “As soon as he saw me, he lunged at me again, growling like a mad dog. I swear to you, I’ve never laid a hand on this animal. I mean, look how cute he is. I’ve only been kind to him.”

Dusty just blinked behind his curls and licked his button nose.

Susan sighed, emotionally exhausted. “Can you help us, Terri?”

“I’ll do my best. We have a lot of work to do. Tell me where Dusty came from.”

“You sure you don’t want anything to eat?” Rob asked.

“No, thanks.” I heard children at play upstairs, and I wondered how Dusty had lasted this long. “Where did you get him?”

“My sister had the most lovable cockapoo,” Susan said, “which is why I chose this breed. I had no idea that not all cockapoos were created equal.” She’d done her research and found what she believed to be a responsible breeder on the Internet. She had to submit an on-line application. The breeder accepted, and Susan sent in a nonrefundable deposit. 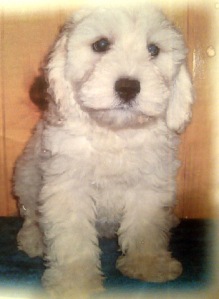 Susan fell in love with the little guy in this picture.

“She let me choose my puppy based on a picture. I suppose that should have been my first red flag. She guaranteed her pups would have wonderful dispositions, and I trusted her.” Susan let out another sigh, Rob shook his head, and Dusty, behind his baby gate, slid down onto his elbows with a thump.

“Out of the blue, the breeder even sweetened the deal by putting my puppy on sale, dropping the price from a thousand to eight hundred dollars, the second red flag. She said she’d been ill and had too many puppies; she needed to move them quickly. That was red flag number three.”

Early on a Friday morning in 2007, Susan along with her young school-age daughter, Sarah, set out on their ten-hour, round-trip journey to pick up the family’s adorable new puppy. The weather was beautiful. Sarah was so excited, she had even passed up a chance to join her classmates on a school trip to the local amusement park.

“What should we name him?” Sarah said. “We still don’t have a name!”

“Why don’t we wait until we get him home to decide? This should be a family decision.”

“I can’t wait! I want to hold him and love him and kiss his little puppy nose.”

“You shouldn’t kiss his little puppy nose. He might have germs.”

“Cockapoos are too cute to have germs. The germs just bounce right off.”

As they neared their destination, they drove through a charming little farm community outside of Pittsburgh. They came upon a sign at the end of a driveway: “Professional Cockapoo Breeder.” They drove down the long driveway to a nice home with a well manicured lawn. As soon as they parked, Sarah and Susan jumped out of the car, eager to meet their furry new family member.

A young woman came outside to meet them. Susan was surprised; the woman with whom she’d been exchanging emails had seemed older. The young woman held out her hand and said, “I’m her daughter. My mother’s sorry she’s not available to meet with you.” She turned to Sarah. “Are you ready to see your puppy?”

“Yes, yes, yes!” Sarah said and jumped up and down.

“Okay, then. Great. Follow me.” And she led them inside.