Mick is ready for anything.

Terri and I want to apologize and thank you for your patience. Our work here has come to a halt since Mick, of “Finding Mick,” suffered his second mysterious and potentially fatal health crisis. I’ve been distracted, distraught, and exhausted. Terri, with the help of her friend and colleague Megan Biduk-Lashinski, has been researching and networking, doing her part to save him.

Born with the mark of a cross on his forehead, Mick is the inspiration for the “Inquisitor” in our name and the model for many of our posters and promos.

In September he turned one year old. He was the runt of his litter, but I didn’t choose him because he was small and frail. Quite the opposite–he was small, yet anything but frail. I wanted a courageous, independent, outgoing canine partner, a dog who could meet the world with a frank and friendly attitude. Mick has been that dog.

Mick likes to help me with my chores.

I expected Mick to be hard-headed. I was braced for a disciplinary challenge, but he turned out to be eager to please me always.  He’s been at my side wherever pet laws allow, and then some. He’s completed puppy class and beginning obedience and is slated for introduction to agility. I teach in a public school, where Mick instantly became a beloved mascot. He frequents local businesses and restaurants. Around town, people are starting to recognize him, “Oh, that’s the famous Mick!”

His failure to thrive began early. We’ve spent a lot of time in local pet food shops, where his charm inspired employees to try to find a food to please and nourish him. Like many of his breed, he’s spooky-smart, but he’s also sublimely sweet, unflappable, and ready for anything.

His last trainer said, “I’ve seen a lot of awesome dogs. Mick is a super-awesome dog.”

Mick tries to keep up with his Uncle Pike. 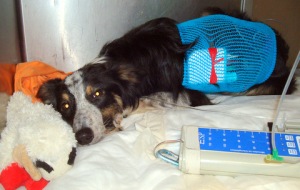 This past July Mick spent eight days in intensive care. Last week, he again required round-the-clock care, this time for four days. As in July, doctors have run every test they can think of to figure out what’s trying to kill our Mick. Again and again, test results come back normal–or if they’re abnormal, they’re mystifying. It’s now clear that Mick is fighting a rare and deadly disease. He’s been recovering quickly from his latest “crash,” but we’re still waiting for a diagnosis and praying for a cure.

While we await the latest test results, Mick is back at home and gaining strength. Terri and I began work on a new series of “Dusty” stories for you. We’ll keep you posted about Mick’s outcome.

It was a long journey finding Mick. It’s been a long year trying to keep him. I feel certain we’re close to a diagnosis and a cure. He loves and is loved by way too many people–nobody’s losing Mick!