I loaded Scout into my truck for the ride home. She willingly jumped into the crate and made herself comfortable. (It’s always helpful when a dog is crate trained, I thought). As we made our way onto the highway she started barking. Vehicles following behind us made her uneasy. I requested Scout to “quiet,” and she immediately obeyed. Another plus, I thought, she’s learned what quiet means, and she’s not so frantic that she’s unable to exercise self-control. That lasted all of about ten minutes. She had to be reminded several times on the way home to be quiet.

At home, I opened up the back of my truck. Mirk and Echo jumped out and as usual made their way around the property to ward off any opportunists that had wandered into my garden to dine on the bushes and flowers. In the interim I opened the crate door. Scout sat cowered in the back of the crate.

She allowed me to reach in and clip the leash to her collar. “C’mon, girl, let’s go for a walk.” Her ears pricked up, her head tilted sideways, then she eagerly jumped out. I took her for a brief walk around the yard; she too picked up on the scent of those furry intruders that Mirk and Echo were busy chasing away.

Once Scout was more relaxed, we made our way into the house. It was time to introduce her to the rest of the pack. Back inside, I dropped the leash and allowed her to make her way around the house. My other dogs, still in their crates in the lower level, started barking. They don’t normally bark when they’re familiar with whoever is in the house; however they sensed the stranger amongst us. Scout ran from room to room, her nose introducing her to the new surroundings. Once she completed her reconnaissance mission, I called to the dogs, “Collies outside,” and Scout, Mirk and Echo darted out the back door into the large fenced area. I went back inside and let Tulley, Deja, and Wyn out to greet the new arrival. 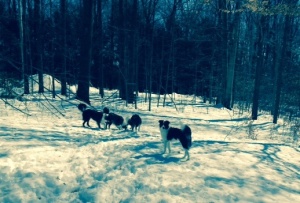 Tulley’s always the first to approach. Ironically, for a dog who was deemed dangerous with other animals, he’s one of my most social and tolerant with the fosters. As they circled around one another sniffing from nose to tail, Scout positioned herself into a play bow, and Tulley responded as playfully as his senior body would allow. Once Tulley completed his meet-and-greet, Wyn, who had been patiently trotting around waiting for Tulley to give the all-clear, ran up to Scout and threw her head over Scout’s back. I knew Wyn’s approach would be strong, so I stayed close just in case her dominant posture would create some tension and require me to intervene.  Scout responded by rolling onto her back, a completely submissive gesture that alleviated any tension between them. After Wyn finished sniffing her, she stepped back, and Scout leapt to her feet and took off running. Wyn followed in hot pursuit. They quickly became best buddies. Deja, at fifteen years old, was completely uninterested in the new arrival. She made her way back inside the house and to her bed. As long as Scout stayed out of her bed, there would be no issue. Once I was sure the dogs were fine together, I went back inside. Scout and Wyn were content to stay outside to run and play with one another awhile longer.

After some time, I saw Scout and Wyn, tongues hanging to the ground, at the door wanting to come inside. As I opened the door they simultaneously dashed to the water bowl and eagerly drank from the dish. Once refreshed, Wyn made her way to the living room to lie down and take a break. Scout went into the kitchen and stuck her nose in a bag of plastic grocery bags ready to go to recycling.

Her face emerged from the bag with a plastic bag dangling from her mouth. She darted under the dining room table and began tearing up her newfound treasure. Such a typical puppy, I thought, and crawled under the table to retrieve the hazard from her mouth. As I reached for the tattered bag she started  snarling and snapping like a wild aggressive wolf, as if guarding the first meal she’s had in days. No time to waste, I couldn’t allow her to ingest the bag. I reached for her collar and proceeded to pull her thirty-two-pound body out from under the table, reached in, and pried the bag from her tightly clenched jaws. Once I had the bag in my hand, I released her than bent down to pick up pieces of the shredded bag that were scattered on the floor. Suddenly, she came back running full bore, and bit my hand while I was picking up the pieces of bag. 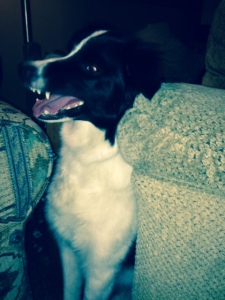 “Shame on You! Get Back!” I hollered.

She stopped, retreated, and looked at me, amazed, as if she had never been spoken to like that before.

Bleeding, aching, and worrying I wrapped my hand in a paper towel, finished cleaning up the bits of plastic, and picked up the recyclables. Time to puppy-proof, I thought. I knew that I would also need to get out the Kongs, Nylabones, and any nondestructible toys to keep her occupied.

Once the kitchen was safe for Scout, I went to the sink to wash the blood off of my hand. I wondered why I hadn’t been warned of this behavior, this couldn’t have been her first encounter, her reactions were too well versed. Maybe her previous owner was just too upset to discuss the issues with me the day she dropped her off, I thought. How would I ever be able to re-home her? What else don’t I know about her aggressive tendencies? I would have to reach out to her previous owner and get more details. I didn’t want another surprise, nor another bite wound.

I didn’t want to get ahead of myself, so I stopped pondering the what-if’s and focused on the moment. I got a leash. “Here Scout,” I called, and clipped the leash onto her collar. First things first, I thought: Get control of the dog. 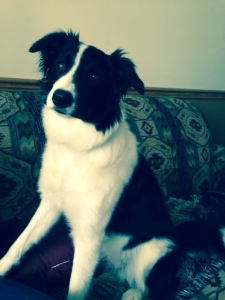