The Heart of a Lion

My husband and I were now the proud parents of a son in the U.S. Navy. After the cheering, hugging, and congratulations I slipped my phone out of my pocket to send Megan a text. “How are Echo and the puppies, Wee?” It didn’t take her long to respond that all was well. I was relieved.

The following evening we arrived home late. I planned to pick Echo and the pups up from Megan the next morning.

The next day I awoke early. I was eager to see Echo and the pups. I wondered if Wee had gained even a couple of ounces in my absence. Echo enthusiastically greeted me right at the door as I walked into Megan’s house. “I missed you too, girl, where are the puppies?” I said to Echo. She promptly turned and made her way swiftly up the steps and into a spare bedroom. By the time I caught up, Echo had already jumped into the whelping box. The puppies were all making their way to her for another morning snack. Even Wee had found a place to nurse and by now was starting to develop enough strength to hang.

Megan followed me into the bedroom, smiling.

I was disappointed, but at least he was no worse. “Have you decided which puppy you like?”

“So far my favorite’s the firstborn male, but it’s hard to tell. They’re still so young.”

I began getting the pups packed up and ready to go. “I want you to visit them as often as you like. The social development’s good for them.”

“Thanks, that’ll be a tough job,” Megan laughed.

Once we arrived home, Wyn was so excited to see the pups, she could barely contain herself. As I moved the pups from the basket to the whelping box she stuck her nose in amongst the little balls of fur pushing, nudging and licking each and every one, especially Wee. I allowed the two to have their usual special bonding time. 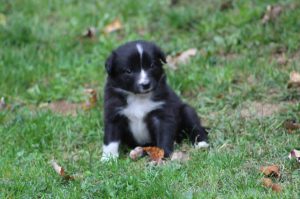 Now that the pups were home and settled again, life continued as before. The family all stepped up to offer extra support and care for Wee. It was also time to notify the seven families that the puppies would be ready to go in another month. I arranged a puppy visitation day for those who lived close enough to make the trip.

I wasn’t ready to promise Wee to anyone just yet.

Wee progressed, consistently a week behind his littermates. His vision and his gait improved. His gut tolerated the puppy mash well. To make sure his heart was developing normally, I took him to see a cardiologist, Dr. Goodwin. Obviously charmed by his tiny little patient, no bigger than two handfuls by now, he listened with his stethoscope. The chest piece nearly took up Wee’s entire underside. Next he hooked his tiny body up to an electrocardiograph machine. I watched the colorful waves go up and down all the while listening to the whoosh, whoosh of his heartbeat. Wee was the best patient, lying quietly in the technician’s arms. I had to remind myself to breathe, or I was liable to be the doctor’s next patient. Dr. Goodwin turned off the equipment, took Wee from the technician, held him in his arms so Wee was facing him. “Well little one,” he smiled, “You have the heart of a lion.”

“His heart sounds OK?” I said, remembering now to take a breath, as I wiped tears from my eyes.

“Yes, his heart is perfect.”

Wellness exams and first vaccines were still a few weeks away. I decided that I wouldn’t torment myself with “what if’s” and would just enjoy the time I had left with the pups. By now they were keeping the family and me busy with three feedings a day, taking them outdoors to learn to do their “good puppy” business, cleaning up, and giving them lots of hugs and kisses.

Wee and his new friend.

Soon enough puppy visitation day arrived. Luckily it was a gorgeous day, and the families and friends came to hold, hug, and love them. A little boy who scooped up Wee and wouldn’t let him go. Wee was perfectly content with his new friend. I must say, it was a beautiful sight. I beamed with delight watching Wee with his littermates enjoying all of the attention.

In the meantime I had gotten an email from someone looking for a dog. She went on to talk about her last dog that had since passed away. She felt she was ready for another. I was immediately drawn to her compassion and thoughtfulness. My only concern was that she lived in Colorado, and I wasn’t willing to ship a puppy in cargo. We exchanged phone numbers, and I gave her a call.

“I would love a Border Collie,” Wendy told me. “I’m an endurance athlete so an active dog would suit me.” We talked for a long time. I discussed some options with Wendy and then mentioned Wee.

“He must be adorable! Would you please send me some pictures?” Wendy said.

“Sure, I’ll send pictures, but I need you to know that I have had concerns about his development.” I couldn’t guarantee he’d develop normally. We decided I’d send pictures, and we’d wait to see how he continued to develop.

The day arrived for the pups to receive their first vaccines. I packed up the whole bunch and off we went to see Dr. Jeschke. One by one he weighed, examined, and vaccinated them.
“What do you think of Wee?” I asked.

“He looks good, other than the fact that he’s smaller than his littermates. If he doesn’t continue to grow, I’d like to rule out a liver shunt. We’d need to do some bloodwork and an ultrasound.”

My fears resurfaced. “Should we do it soon?”

The next twenty-four hours I watched the puppies closely for any vaccine reactions, and they all did well, even Wee!

The following weekend all the pups would be heading out on their new adventures with their families. As always, the day arrived sooner than later. The box of tissues was ready to roll! One by one, the families arrived, scooping up their chosen bundle of joy. I’d go over all of the appropriate information and paperwork and exchange hugs and puppy kisses as they made their way out the front door. Megan chose not just the firstborn black-and-white male but also a female that so closely resembled Wyn I could barely let her go. Normally I don’t recommend that someone take two puppies, but Megan and her husband Keith were up to the task. I would also be an intricate part of helping her raise the pups. I told her, “We’ll have joint custody,” and she laughed and hugged me.

In the meantime Wendy and I continued to correspond about Wee. By this time I was more at ease with his progress. The little stinker was doing great!

“I’d really like to adopt Wee,” Wendy wrote me. “I have a trip planned to PA. I’ll make arrangements to have him fly in coach with me. What do you say—can he come home to Colorado?”

“I’d be honored,” I replied. “What a lucky pup to live with you in Colorado.” So the arrangements were made for Wee to travel to with Wendy to become her long-distance running companion in the mountains of Colorado. The littlest pup was going on the biggest adventure!