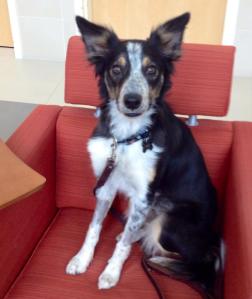 Hoping for an answer and a cure

As many of you know, Wednesday I took Mick to the University of Florida’s veterinary hospital. When we arrived, I discovered that the doctor who’d been given the case the day before had turned it over to someone more experienced. “Sorry you drove all this way,” Mick’s new doctor said, “but I’m going to need a few days to absorb all this.”

Absorb? Absorb? I thought about autoimmune destruction of gastric parietal cells and stopped myself from making a bad joke.

We sat together for over an hour. He’d read for awhile, ask a few questions, and kneel down to examine Mick. “I hate to tell you this,” he finally said, “but, your dog is . . . really interesting.” He said Mick either has an extremely rare genetic disorder, perhaps something wholly new, or a rare form of something common. “Either way, this is one for the medical books.”

After he left the examining room, his student doctor stayed behind. “I have a Border Collie too. I love her to death.” She hugged Mick’s file to her chest. “I’m the one who’s going to do all the grunt work on this case.” Her eyes burned with intelligence and determination. “I’m going to discover this disease and cure Mick, I promise you. We’ll call it ‘Mick’s Syndrome.’ Or maybe it’ll be named after me.”

I smiled and wondered if I was too old for veterinary school.

Then, they sent us home to give them time to do their Mick homework–ordering more records, compiling charts and graphs, conferring with other experts, and doing research.

Anyone would be terrified if a deadly mystery illness attacked their loved one, especially one so young and full of promise as Mick. I’m remembering my friends whose children suffered. I’m in mind of the movie, Lorenzo’s Oil. Is there a Nick Nolte for Mick? Is it easier because he’s “just a dog,” or in some ways does that make it harder? I do know it’s especially painful because Mick is perfect for me. He’s exactly what I searched for: a well tempered little character, outgoing, sweet, and biddable, exceptionally well suited to my sociable nature and adventurous ways.

Instead of simply taking over my life the way Border Collies do, Mick brought with him an occupying army of new words: eucobalaminemic, neutropenia, homocysteine, aciduria, hyperkalemia, cosyntropin, neoplasm, aldosterone, cardiac collapse, and immune-mediated hemolytic anemia.

One week I’m  wondering which is the best way to teach him not to jump up on people. The next I’m wondering if his neutrophils are trapped. Why is his cobalamin normal but his folate “in the basement?” What stole his ionized calcium? It was there July 2, gone July 17th! Were his white bloods cells pillaged before or after the septicemia? Nobody knows. 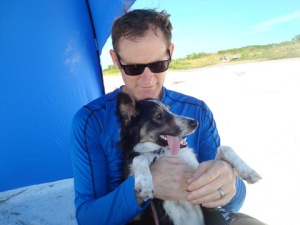 My husband and I were hunting for a house with a great yard for Mick. As the baffled doctors ordered increasingly obscure and expensive tests, we began to argue about when to “put on the brakes” and when to let Mick go. Mick’s illness waxes and wanes, and twice now it’s come on so strong it almost killed him. Both times we spent a staggering amount of money to save his life, but couldn’t put an end to the threat. We just had more mysteries and no answers. What’s the point of draining our savings if Mick is never going to enjoy his new yard anyway? The next attack could kill him. 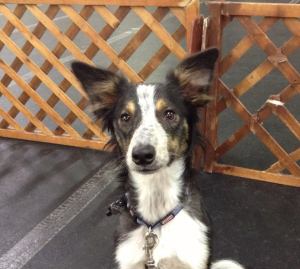 Mick at school: a super-awesome dog

In his good times, Mick’s puppy school and basic obedience trainers told me, “He’s a super-awesome dog. You two are fun to watch. You have a powerful bond.”

I’d beam and say, “Mick makes me look good.” The only thing I can take credit for is I sure chose well. Except for the deadly illness thing.

When he’s sick, doctors, specialists, nurses, and technicians look at me gravely and say, “Not a lot of people would have done this for him.” 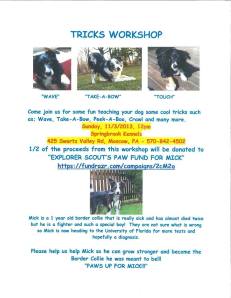 I don’t think so. I can’t think so. As Mick’s mystery persists and his medical bills mount, love and support have risen up around us and humbled me. On social and medical networking sites, Wendy Drake, Megan Biduck-Lashinski, and Terri Florentino have rallied to beat the clock, solve the mystery, and raise funds to save Mick’s life.

Thanks in part to their efforts, more and more doctors are examining Mick’s case. Doctors and their staff tell me they lie awake at night worrying about Mick. The young doctor at UF stayed up late reading his files with her pulse racing. “It was like a television show. I kept thinking, ‘Oh, no! Does he live? Does he live?'” That now depends in part on her. I told the doctors, you better do right by Mick–over a thousand people are watching you.

If so, crazy makes for pretty great company.

You keep me going. And I have to keep going, not just for Mick but for any other dog and family who might be stricken with this disease. If the anguish and expense of this hit-or-miss, trial-and-error, roller coaster that we’ve been on can’t help Mick and others, what is it for? We must solve this for everyone. Consider this: how many other beloved dogs did this disease kill before anyone could identify it?

With such love around us, it’s impossible to give up hope. Mick’s ups and downs are exhilarating and harrowing. He’s medically fascinating. This would be really cool if it weren’t our Mick. 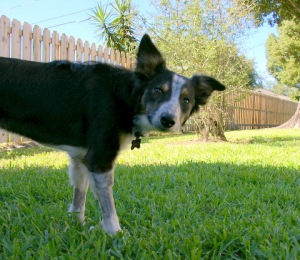 Mick is here. He’s not just an interesting medical case or a novelty pet with a cross on his forehead. He’s a sweet, talented, sociable young dog who’s yapping and wants me to throw his tennis ball NOW. A week ago I thought he was dead.  I’m exhausted and scared. How long will this round of good health last? Will the doctors solve the riddle in time?

For now, Mick is on an upswing. He’s had these before. Today Mick is having one healthy, boisterous hour after another. We’re going to go enjoy them while they last and hope the riddle is solved before next attack. I dread having to decide whether or not to let him, and his mystery, go.

Thanks to you, we’re far from that dreadful moment. His prospects are full of hope. You keep us going in every possible way. Thank you for caring, for keeping us company, and helping us save Mick.

16 responses to “Mick Goes to Gainesville”