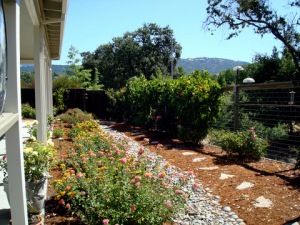 Over the following week, as my mother and I cared for John, I carried my laptop with Skype video of Delaney from room to room. She rode around with me like a disembodied head in a rectangular clamshell. One night she had been frightened alone in the house, so we even slept side-by-side in Skypespace.  The next morning, I carried the laptop to the kitchen counter like a virtual bassinette. My mother and I whispered so as not to wake her.

A hospice nurse arrived, one I hadn’t yet met, Janice. “Good morning’!” she sang out. “You two look tired!”

Three thousand miles away, my daughter rolled over and disconnected us.

“Go out! Get lunch! Enjoy each other,” Janice said. It was an order. 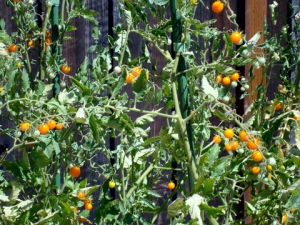 My mother ducked into the bedroom. She and John murmured while I sent an email to Delaney explaining we’d be back in an hour.

My mother and I converged in the hall, I in jeans and T-shirt, she in cotton eyelet Capri pants, a tailored top bright with poppies, gold and diamond jewelry, a distressed bronze leather Gianni Bini handbag, matching shoes, and a cloth grocery bag.

“I should’ve ironed my T-shirt,” I said. 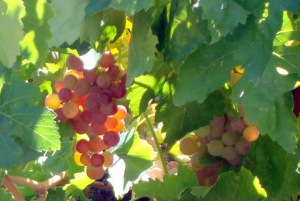 We did as we were told. The air was dry and clear, the sun fierce, as you can see in these pictures I took of the yard that week, but a light breeze blew and made the shade delectable to the skin. We got soup at a tiny bistro and enjoyed the illusion that we were just women who might be out shopping for shoes or taking in a matinee rather than space-shuttling a dear man to his death. 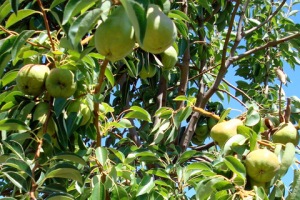 My mother pushed aside her wedge of sourdough and rested her spoon on the plate. She always looks fantastic—classy, refined, stylish, well put-together. Even when everyone else has the same style on, she seems overdressed. She’s fine-boned, with a pointed nose and chin, frosty blue eyes, and a dashing asymmetrical haircut that has become her signature.

She shifted uncomfortably in her seat, and after a long pause, she said, “When I was a girl, old people didn’t live alone. Young couples lived with parents before they bought a home or had children. Older people moved in with their children. Single adults never left home.” 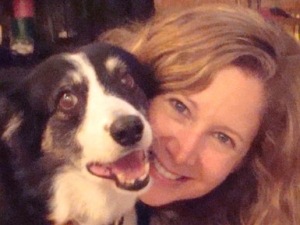 Casey would love a road trip!

“What I’m thinking,” I said, hoping I heard her right, “is Delaney will put in a year at USF, and, next summer—I can’t put Casey on a plane. She’s too old. But she’d love to ride in the car smelling her way across the country. Next summer, I’ll put Delaney, Casey, and the cat in the car and drive west.”

She smiled. We had heard each other. Finally, after thirty years of fallout from the fire, divorce, and dissolution of my childhood home, what was left of the family would gather together again. She sat up straighter with stifled joy; a lady maintains temperance in conversation. Instead of whooping, she said, “I’ve always wanted to drive across the country.”

I’m not a lady. I threw my arms wide. “Come with us! I can finally take you to New Orleans! I’ll stuff you with gumbo and jazz!”

“There are lots of places around here where you can teach—Sonoma State . . .”

I nodded. We would focus on the practical. “Delaney can work a year, establish residency . . .” 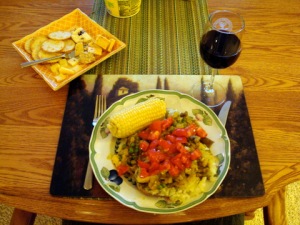 A meal I made for my mother with produce from John’s garden.

“She belongs in California.” My mother lifted her iced tea, took a long sip, and set it down. The ice tinkled and whirled like the diamonds on her bracelet. “It won’t cost you much to live with me.”

I concentrated on proper use of my soupspoon—you scoop away from yourself, at twelve-o’clock. I let the weight of what she said sink in.

Into my uncertain silence, she added, “You’ll have time to write another book.”

We lifted our soupspoons and trembled with how wonderful and awful it was.

I said, “I wish Delaney’s disembodied head had been on the table to hear this.” 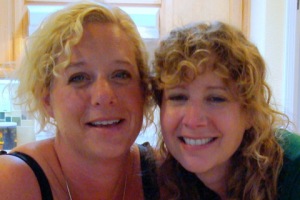 When I moved west, my sister Laura and I could visit any day we wanted.

“When we get home,” my mother said, “let’s look up Sonoma State.” On the way, we stopped at the grocery store to get ingredients for banana bread.

The previous night, my mother had told me, “Every year John hoped you were going to send another loaf of bread.” When I was young and poor, at Christmas I sent my mother and John a dessert bread—banana or strawberry or rhubarb—because that’s all I could afford. And I was ashamed. Once I earned more than subsistence wages, I entered a modest but more respectable league of gift giving. I sent Jackson and Perkins rose bush seedlings, or amaryllis bulbs, or a holiday table runner. I never knew John appreciated my humblest gift the most. 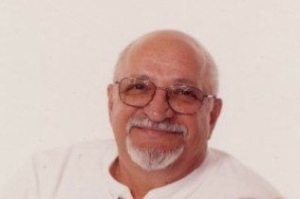 John told the nurse I was his daughter.

Even though he was just my stepfather, John had been more thoughtful to me than any man I’d ever known. He was generous with praise and time, with food and money—especially food. He loved food like an Italian man should; the irony of esophageal cancer wasn’t lost on us.

The night before, I remembered, he’d taken small bites of macaroni and cheese, so he could eat some fresh-baked banana bread. I’d seen a bunch of freckled bananas in the kitchen. I would bake for him and fill his house with the scent. He’d take a few bites and know I loved him. We hurried home. 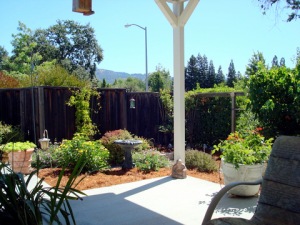 The view from the porch swing.

Janice intercepted us in the kitchen and cornered my mother. “While you were gone, John and I had a talk,” she said. “I asked him if he wanted to stay asleep. He said he did.”

I counted the bananas. I had enough for four loaves.

“Shouldn’t he have discussed it with me?”

I turned around. “What’s going on?” 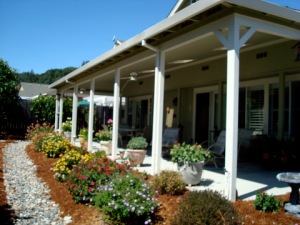 My mother stood in the middle of the kitchen with her purse still hanging from her shoulder. Her collarbone looked as delicate as a bird’s behind the pressed scalloped collar of her blouse. The countertop and cabinets, the floor and furniture, everything unhinged. The house floated and turned as if in the eddy of a flood. I sought my sea legs. I lost any sense of direction. The spaceship was docking—I could hear it in my mother’s voice.

This entry was posted in Mick of Borderland and tagged border collies, dogs, family, inspiration, sheepdogs. Bookmark the permalink.