I went straight into the house and called Karen. “I have a lovely little female Border Collie that I’d like you and your family to meet.”

“How exciting!” she said.

I gave her some details about Raine. “She loves children. She just lives for them. Can you come meet her this weekend?”

“That would be great!”

Jim, Karen, and Morgan came to meet Raine and visit with Tulley. Tulley had not seen them since the day they dropped him off at the farm. Ed and I were curious about how Tulley would react, but decided that time alone with Raine first was more important, so we put Tulley in a crate to wait his turn. 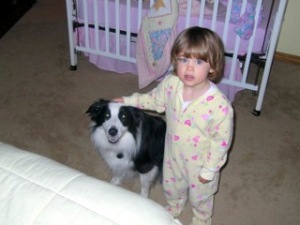 Sweet and gentle, Raine was not the type to jump all over and get too excited during an initial welcoming. We allowed her to wander freely as they came inside. Little Morgan, now three years old, huddled close to her parents as Jim and Karen bent down to greet Raine. Tenderly Raine approached, calm and welcoming. Once Morgan realized that she could touch Raine without the fear of being bitten, she relaxed. I took Raine through a sequence of obedience commands to show them what she could do. I also brought out some toys and treats so they could all have some fun together. They absolutely adored her, and she seemed content with them. As I suspected, she was most fond of their little girl.

Then we let Tulley out. He greeted Jim and Karen then grabbed a ball.

Karen’s eyes lit up. “He wants to play!”

Morgan stayed close to her parents, and Tulley paid no attention to her. All the while Raine stood quietly and watched Tulley playing with the toys and people. As we discussed the details about Raine, Tulley ran up to Ed and stood next to him. Out of habit, Ed reached down and pet him all over his body.

“You can touch him on his back end?” Jim asked with amazement. “Tulley would never allow anyone to touch his back end. If someone tried, he would’ve bitten them.”

Ed was taken aback. “Once he trusted me, I could touch him anywhere.”

We all watched Morgan stroking Raine, who wagged her tail and dipped her head, sweetly looking into Morgan’s face. “Well?” I said, grinning.

Jim and Karen looked at each other, beaming. “We’d love to take her home!”

Years pass for Raine and Morgan

We agreed that there would be a trial period. We would keep in close contact. And so we did, there were frequent emails with updates. Most were of charming pictures, stories and updates about how well Raine was doing. They loved that Raine was a social butterfly; all of the neighbors quickly got to know and love her. The relationship between Raine and Morgan was all I’d hoped–they adored each other.

A couple of years passed, all was well, and we kept in touch with the occasional email, pictures, and Christmas card exchange. Karen remembered Tulley’s birthday every year and sent him a toy through the mail.

One day Karen phoned, crying so severely I could hardly understand what she was saying. “Raine ran out into the road, right in front of a car.”

There was a long pause. I was speechless; my lips quivered, my eyes streamed. I took a deep breath. “How are Jim and Morgan?”

Karen and I spent a very long time on the phone consoling one another. When we finally hung up, we promised to keep in close touch. I put down the receiver, buried my head in my hands, and sobbed until I had no more tears.

Morgan drew this picture and said, “Raine is sad because she misses us.” 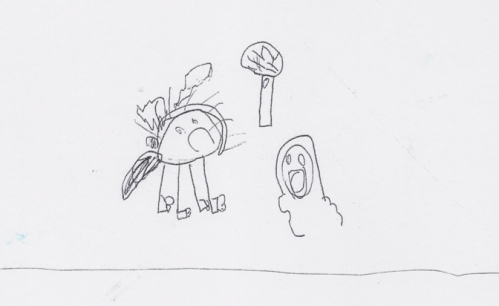 Morgan’s drawing, “Raine in Heaven with a Tick, a Hairbrush to Remove the Tick, and God, Who Will Take Care of Her Now”