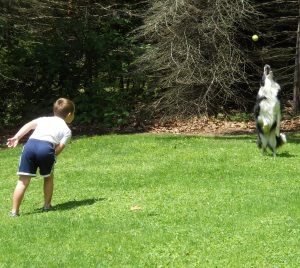 We were delighted with Tulley’s progress. We played the “touch and treat” game with as many people as possible and took him to a weekly agility class, where he moved, joyful and carefree, through the equipment, one obstacle at a time. He enjoyed inviting people to play fetch. Fetch allowed Tulley to work his “comfort zone.” Playing fetch seemed to be the only way Tulley was comfortable with children. I knew, if a child were to run up and touch him, he would have bitten him.

I called Tulley’s owner, Karen. “I’m pleased to tell you that he’s better-behaved with adult strangers.”

“How about children?” Karen said. Their daughter had already sustained one serious bite wound—they could not let it happen again.

“Well, he’s still uneasy with children when they come close, but he will play fetch with them.”

“Will we ever be able to completely trust him with our daughter?”

What could never be again.

“I wish I could make you that promise, Karen, but I can’t.”

“Ever?” Her voice quavered.

“I want more than anything to make you that promise, but I’d be remiss in giving you that guarantee.”

Karen sobbed as she spoke. “I understand. I’ll talk to my husband and let you know if we’d like you to continue the training.”

I hung up the phone, my heart heavy.

A few days later, Karen called. “What happens to Tulley if we can’t take him back? We couldn’t stand for anything bad to happen to him.”

“I’ll try to place him in a home without young children.”

She started to cry, this time so hard that her husband Jim took the phone from her. “If you’re absolutely sure that you can’t make him safe for our daughter, we’d like you to find him a new home.” Even Jim could barely speak the words.

When my husband got home later that day, we discussed Tulley’s fate. Ed agreed Karen and Jim were making the right choice. I told him I was afraid Tulley would lose ground during a re-homing process. “But the longer he stays with us, the more bonded he is. That’s going to make the transfer into a new home even more difficult.”

Ed sighed. “I don’t know, Terri.” He gazed at Tulley, who sat panting and watching us as if he knew we were talking about him. “We’ve always felt a kind of kindred spirit with Tulley, haven’t we?”

I smiled. Tulley had shown an immediate fondness for Ed. “You know,” I said, “Tulley chose you to be his person.” 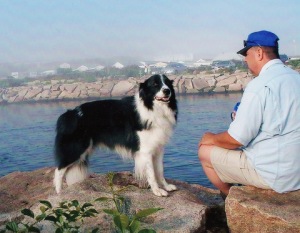 Tulley and his chosen person, Ed

I called Karen. “Ed and I decided that Tulley will stay with us.”

“Yes”, I said, “Ed and I have gotten very fond of him, and we’re concerned that he’d lose ground if he were re-homed.”

“I can’t thank you enough.”

“To tell you the truth, we’re thrilled to have him,” I said. “But will you do one thing for me?”

“Will you let me find the perfect dog for your family?”

“Yes, please,” she said, laughing. “Nothing would make us happier.”

It came to pass that a sweet, two-year-old female Border Collie named Raine entered our lives.

Raine’s previous family had acquired her from me as a puppy. All new families make me a promise that if for any reason during the lifetime of their dogs they can no longer keep them, they must return them to me. My kids are always welcome to come back home, regardless of the circumstances.

Raine’s family, due to personal issues, could no longer keep her, but they were a nice family with a few young children whom Raine adored. The day the family brought her back to me, I will never forget. Three very young children embraced Raine while tears poured from their eyes and ran down their soft little cheeks. Raine stayed close, obviously sensing their sadness, licking their tears away as quickly as she could. As she watched them load into their vehicle, she became slightly frantic, sensing that separation from “her pack” was imminent. She paced, whined, and pulled on the leash as they drove away, leaving her behind.

It took Raine time to come out of her depression. Eventually settled into our day-to-day, however, she always seemed to harbor an underlying sadness. One particular day Raine was out in the front with my husband while he was doing some yard work. She was so mindful and well behaved that she would never leave the property, but this day, Ed called to me, “Terri! Have you seen Raine?”

I looked but didn’t see her anywhere. Then, a few houses away, I heard children’s laughter. “I think I know where I’ll find Raine.” I followed the sound of the children’s play. There amongst many young children sat Raine. She was the happiest I’d seen her since she lost her previous family.

Right then and there, I knew what I had to do. I left her playing with the children and went to make a phone call.