Lisa Lanser Rose holds an MFA from Penn State University and recently won the 2013 Florida Review Editor’s Award for the  essay, “Turnpike Psycho,” which was also named a Best American Essays 2014 Notable Essay. She’s the author of the Border-Collie-centric memoir For the Love of a Dog (Random House). Her novel about a dog ghost, Body Sharers (Rutgers University Press), was a finalist for the 1993 PEN/Hemingway Foundation Award for Best First Novel, the AWP Intro Award, and The Washington Prize for Fiction. She has lived with, written about, and been fascinated by Border Collies for twenty-five years.Lisa fosters dogs for several herding dog rescues. She trains her Border Collies Mick and Maisie and volunteers at the Upper Suncoast Dog Training Club. She’s a Certified Trick Dog Instructor.

I not only work with animals, I see them as part of my identity. I’ve
had a natural affinity for them since childhood, and it carries into my professional and personal life. My love for animals led me to my career as the hospital manager at the Abington Veterinary Center, dog training, specializing in behavior and volunteer work with shelter animals.  and my hobbies, which include sheep-herding and obedience competitions.

I grew up in Bucks County, Pennsylvania where I spent a great amount of time on my family’s farms and always chose to play with and write about animals.

“There was no conscious time in my life where I decided I wanted to work with animals; it has always been a natural part of who I am. I remember when I was in sixth grade, my teacher pulled me aside and told me to stop writing (all her writing assignments) about animals. It was devastating. What else was there to write about other than animals?”

When I was 16, I purchased my first horse, an appaloosa-Tennessee walker cross I named Duke. He was underweight when I purchased him, but after devoting my time to nourishing him to a healthy weight, he was ready to compete in gymkhana. “We were soulmates, He would have followed me to the ends of the earth, I adored that horse.”

Working with horses evolved into an interest in working with dogs. After earning a degree in business from Montgomery County Community College, I combined my passion with a profession.

I’m the hospital manager at Abington Veterinary Center, where I oversee the day’s operations and manage staff, schedules and payroll.

I’ve also volunteered at local animal shelters, where I train dogs so they have an easier time finding their forever homes.

“I feel I have been blessed with the ability to help the animals and make a difference in their lives.”

“Adopt the pace of nature; her secret is patience.” — Ralph Waldo Emerson

From left to right: Tulley, Echo, Roy, and Mirk

At Shebaa Border Collies, life is good for Terri’s canine peeps, and it’s all in the family–Tulley is half-brother to Mirk and Echo. He’s also Roy’s uncle.

Everything is “relative,” brothers, sister, and nephew, good eye and balance, a good pack of good dogs. 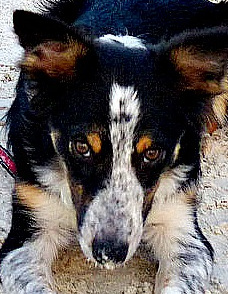 When Lisa’s Mick was about eight weeks old, a cross began to emerge on his forehead, leading people to call him “The Ash-Wednesday Dog.” Some even suggested she try selling him on E-Bay. The cross inspired the name of our magazine and made his the face of The Border Collie Inquisitor.

Perhaps the cross was a blessing. In his puppyhood, Mick was stricken with a mysterious, chronic, and near-fatal illness of unknown cause. 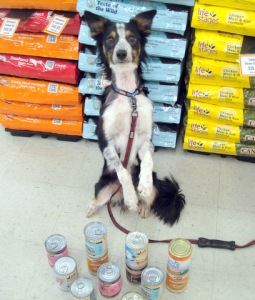 Miraculously, he survived and is now thriving. Mick is the son of Cheryl Jagger-Williams’ Belle and Imported Fleet. He’s just one of many bright, sweet, driven, and highly biddable puppies from that breeding.

He’s also a consummate ham, eager to show off for the camera, and the camera loves him. He’s been performing tricks for crowds since he was barely three months old.

He adores everyone, people and dogs of all ages and sizes, and dreams of pleasing the whole world.

3 responses to “About the Pack”