You and Me, Casey

After moving my only immediate family member out of my house, I drove the forty-five minutes home thinking about everything other than the fact that I’d just cut my heart out and stored it in a cement-block dorm room. When I got home, I took Casey outside to play Frisbee, just as we did every day. Delaney might as well have been over at a friend’s house for the afternoon. I sat on the grass, and Casey dropped her Frisbee near my feet and whined until I threw it. When I did, rather that rocket after it the way she used to, she watched it sail and skid onto the grass, then whined at me. We weren’t the creatures we once were, she and I. “I can’t reach it,” I said, and she fetched it. I threw the Frisbee and Casey panted to and fro, stopping occasionally to drink out of my water glass, which made it her water glass.

Against the horizon in my mind, the sails of dark thoughts approached: my mother, my stepfather John, my father. Casey was in her final years, but for me, there were more to come. . . . I decided I had stuff to do. I got up, and we went into the kitchen, but when we got there, it turned out I had nothing to do in there.

So I took the stairs two at a time, Casey behind because she wasn’t fast enough anymore to head me off the way Border Collies do. When I burst into my bedroom, I stopped short, and Casey bumped into me. I had nothing to do in my bedroom either.

I veered toward the rubble in Delaney’s bedroom, but at the sight of my only child’s ransacked room, a howl rose in my throat. Casey knocked into me, and I closed the door before I made a noise.

Casey and I swerved and trotted down to the kitchen. I had people to call—my mother and my friend Nina, or maybe someone in the tribe, or maybe Fred or Dan or Vito, three men whom I kept as friends as long as we never discussed falling into love or falling into bed. But when I sat on the kitchen stool and picked up the phone, I was wrong about that, too. I put the phone back on its charger. 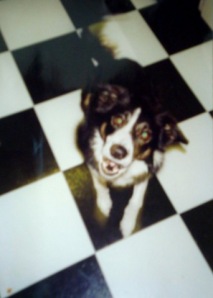 Casey suggested we try the living room and led me in there, but I couldn’t think of anything to do there, either.  She looked at me sideways, her jaws parted slightly in a leering pant. Her body seemed padded and ponderous as she stepped toward her orthopedic dog pillow, glancing back at me over her shoulder to see what I thought of her suggestion that we maybe lie down on it together for a while?

We tried that. I stroked her shoulders and face, and she put one paw on my chest and pushed until her elbow locked, keeping me at arm’s length. She’d always done that, as if she liked being close, but not too close. We lay there for several ticking minutes. Her eyes closed. Her locked leg vibrated. The air conditioning shut off. The refrigerator shut off. On nearby I-19, the traffic amplified its stage whisper, giving its incessant soliloquy that this was the most densely populated county in Florida, with an average of thirty-three hundred people per square mile and three-hundred-and-eighty thousand cars on the road, an average of fifty-two highway deaths a year on this stretch, far, far from woodland and farmland and sheep, under a sky scribbled with wires and littered with billboards. My stomach growled. I asked Casey, “Want dinner?”

Casey was stone deaf, but we understood each other. We both got up.

I bounded to the kitchen, and, laboriously, she followed. It was time for dinner, time to scoop some dog food, haul open the fridge, and start cooking, as I’d done nearly every day since I’d gotten my own kitchen twenty-four years before—but I was wrong again. Once I’d poured kibbled into Casey’s bowl, there wasn’t anyone else to feed.

Casey inhaled her kibble like a Shop-Vac. The cat slithered seductively against the kitchen faucet. I opened a drizzle for her. A stillness settled in my brain.

Casey tiptoed up behind me, panted, and burped.

I went down on my knees and wept. With her paws, Casey pried my hands away from my face to bump me with her nose and lick me, and I rolled away and keened. I had loved every second of my days and nights as Delaney’s mom. I had loved her and loved the woman I was in her company. Frightened, Casey came around and shoved her nose between my hands and face, and I got up. I rinsed my face in the sink, then went down again. If I couldn’t be Delaney’s mom anymore, I didn’t want to be anyone else.

I cried until a headache shut me up. I ate a bowl of cereal so I could keep an aspirin down and went to bed. About three in the morning, I woke and remembered. Delaney’s room was located exactly where it always had been, across the hall, behind a closed door, but now it gaped in the dark like the maw of a mausoleum. I slid off the bed to cry on Casey. We huddled on the floor, clinging to each other, the lone survivors.

And somewhere in the house, there crept an afterthought, a cat.

Day after day, night after night went on like this. Casey had always slept near the foot of my bed, which meant that I had spent fourteen years making a Border-Collie-sized birth around the foot. In the middle of these post-apocalyptic empty-nest nights, I had to get out of bed and crawl on the floor if I wanted to sob into her coat. I had never before made such use of my dog, but it became a midnight ritual. Like other physiological acts that involved uncontrolled bodily sounds and fluids, unhinged grief was best performed behind a locked door, with access to toilet paper and running water.

The dog was wet for two months.