“I’m not leaving.” I grabbed my daughter Delaney’s hand. I felt a wave of relief. We’d have our last three weeks together after all. For three more weeks, we’d share the same roof, walls, and floors, the same briny wind through our windows, the same pot of coffee, the same mailbox.

Now, I had only one challenge: how to tell my mother she’d bear her unbearable burden alone after all?

A horn blew in the front drive, and we jumped to our feet. My old Border Collie Casey stood up with us, clattered sideways, then steadied.

“You should go,” Delaney said. “Rose or Rick can help me take her to the vet in the morning.”

If Casey’d had a stroke, what could I do anyway? “She doesn’t seem too bad,” I said. I frowned, otherwise I might weep all my eye makeup off. 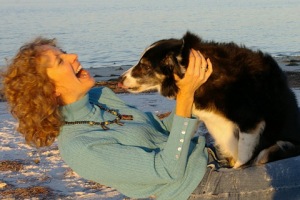 As if there was no threat to any loved one anywhere.

Then an airport shuttle swept me away and noodled me around neighborhoods, idly collecting more passengers as if there was no reason to hurry, no threat to any loved one anywhere in the world. Eddying along, shoulder-to-shoulder, the others made small talk, but I was curt. “My dog is sick.” They stopped talking to me. Could they tell I’d thought about hijacking the car? Did they condemn me for abandoning my dog and daughter? Or did they secretly sneer at me for worrying over a mere animal? I glared out the window.

At the airport, I texted Delaney for news. My colleague, Rick, had promised a ride to the vet the next morning. Casey was the same. I tried to shake it off, but the broken way she moved and the unnatural tilting of her head reminded me of my first Border Collie. Epilepsy had killed her in a manner that still chilled the pit of my stomach.

Did blood ties trump the bond with my dog?

How could I put three thousand miles between my responsibility and myself? Was I letting my mother’s needs override my own? Or did blood ties trump the bond with my dog? Perhaps I’d just banked on the characters who’d live—the dog and the man were checking out, so I was just going where I was needed most. Delaney had our friends to help her, but my mother had been tending her husband and his cancer for two cruel years. She was at the end of her emotional resources.

As we merged onto the highway toward the airport, the panic subsided; my chest petrified. I boarded the plane and allowed my stony self to hurtle westward, Tampa to Atlanta, Atlanta to San Francisco, eight hours of mental cement. On the ground  in San Francisco, I texted Delaney, “You still up?” No answer. 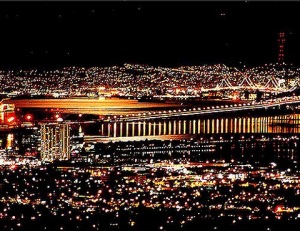 I looked back, southeastward.

I was buckled into another shuttle. It was well after midnight, and the driver shut off the interior lights in the bus. When we crossed the Golden Gate toward Sausalito, we exited the bank of fog straight into the Milky Way. I looked back, southeastward, the way I always did, to lose myself in the lights floating on the invisible hillsides, suspended in the sky, and winking in the bay.

I knew then why I had left. My dog was dying. My daughter was leaving. I was unmoored.

My mother picked me up at the shuttle depot and carried me in her car. I checked my cell phone—still no word from Delaney. When we arrived at the house, the hour was after two in the morning. The sprinkler system sizzled through the night garden, sputtering with the scent of wet soil and grass.

The security system beeped as we opened the door and rolled my suitcase rumbling and bumping over the stone tiles. Golden lamps cast soft, mustard-colored shadows on oil paintings of Italian landscapes and glinted on plates glazed with painted-fruit patterns. A glistening ceramic rooster lorded over the great room, silently crowing while a television flickered and mumbled.

There, my stepfather sat waiting up for us. He rose from his recliner to greet me and stepped into my arms. It surprised me how small he was, this man who had been kinder to me than any other man I had ever known.

“I’m still here,” he said, his voice unnaturally soft and hoarse. “I keep thinking, ‘This is it’ . . . then I wake up, and I’m still here.” He sounded disappointed, like a man eager to take out his new sailboat, but every day it rained.

I’d never met anybody who wanted, so candidly, to die. Following his tone, I might have said, “Oh, I’m sure it’ll happen any day now.” I could have elbowed him and quipped, “Isn’t there something you can take for that?” I might have  puffed on my Groucho air-cigar and said, “The suspense must be killing you.”

Instead I said, “John, you must feel awful.”

I didn’t know. I nodded. 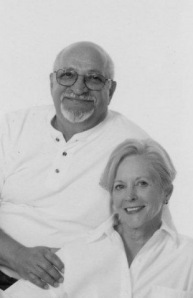 John and my mother.

My mother brought two glasses of Sangiovese, John’s favorite wine. “The blood of Jove,” my mother said as she handed it to me. I looked around for John’s glass. The last time I visited, we three tipped many a glass of Jove’s blood together. This time, John couldn’t swallow—he had esophageal cancer and was starving to death. My mother sank beside me into the white leather sofa and caught me looking for the third glass. We clinked our glasses together and didn’t cry.

For a few minutes, we sipped our wine and watched John drift in and out of sleep in his reclining chair. My mother said, “You want to go to bed?”

She led me out on the patio without turning on the light. We sat on the swing together. My mother tends to be aloof, not physically demonstrative, so the intimacy of sitting together on the swing made me alert and oddly happy. We rocked for an awkward moment, and then she said, brightly, “John says he’s going to another planet.”

“Cool.” I nodded even though she couldn’t see me. “Kind of a wormhole thing?”

Swinging in the dark, I could barely make out the brushed white cement of the patio floor under our feet, the sunshade over our heads, or the wine sliding in our glasses, but I could feel everything.

As my eyes adjusted, I could see the shadows of John’s work

She said, “John poured this concrete.” The property adjoined a nature preserve, and we heard frogs in the stream and bats on the wind. “He designed the sunshade. He raised and bolted the lumber himself.”

I knew all that. She wasn’t informing me, she was inviting me into her twilight, a state of gauzy marveling over the seam between what is and what will never be again. I felt the existential injustice—what stays and what vanishes isn’t fair. Scrap the sunshade. Let us keep the man. We rocked in the dark on the swing and shared the teetering terror between forgetting and remembering.

As my eyes adjusted, I could see the shadows of John’s work. We were facing south. Sitting there, in the dark, something pulled me southeast, as if my left hand might reach out and lay itself on my daughter’s head. Then I remembered how far away I was and felt a kicking panic, adrift in a sea of space.

Would I ever lay my hand on my old dog’s head again? 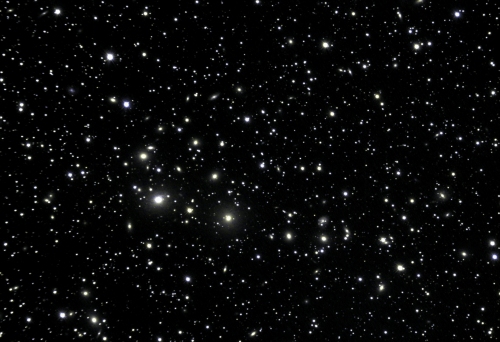