It was time to call Bud’s previous family. I needed details about his past.

When a woman answered, I said, “Hi, my name is Terri, and I currently have Buddy.”

I took charge of the conversation. “It’s okay. I know you tried everything. It’s not easy.” I explained my involvement. “It would really help Buddy if I had detail about his past.”

“My husband and I got him as a puppy from a breeder,” she said, eager to help. “Things just weren’t right with him from the start, and we talked to her many times.” The breeder had refused to take him back and wasn’t helpful with training recommendations. Buddy was an unusually quirky Border Collie puppy who posed a unique set of challenges for her and her husband, none of which they were equipped to handle. Over the years they worked with various trainers, sadly, with no success. When their first child came along, they sought help from a new trainer in the hopes of building a successful relationship between the dog and their child. The new instructor’s training method did not suit Buddy at all—his behavior escalated out of control. “We were told that the only options left were rescue or euthanasia.” She began to cry again. “We were devastated. But we couldn’t trust him around the baby.”

“Of course not,” I said gently. “You did the right thing.”

“Do you think . . . is there any chance of managing his behavior? We’d really like to take him back.”

“Perfect! That’s my goal.” What else could I say? The possibility of finding Buddy another home was slim to none.

Now that I knew from his previous owner a training regimen had made him fearful of training, I confirmed it. Whenever I attempted basic obedience skills, he was adverse and dismissive. I was determined to help this dog understand that I would never cause him anguish or pain. He needed a total life do-over.

They say that when a dog needs a fresh start, change his name. In case using his name in a particular circumstance reminded him of an unpleasant experience, I decided to rename Buddy. Thinking the name should have a similar suffix to his previous name so as to ease with the transition into the new name, I decided to call him Tulley. The name Tulley is a nice Irish/Gaelic name that means Living with the Peace with God, which I felt apropos. 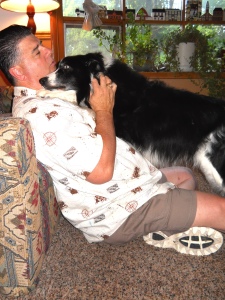 Once Tulley became familiar with the “touch” technique, he wiggled with excitement when playing the “touch” game. I now needed to devise another technique that would promote closeness and trust. I observed that when he sat by my husband he pressed his head against his body. I decided that we would promote “hug,” offering treats and praise each time he pressed against someone. Since my husband was his person of choice, I recruited him to introduce the process of “hug.” Just like “touch” the game of “hug” became a joyful and rewarding task. No doubt the highly delectable treats were a motivator as well. Tulley also had a very high play drive that would helpful when promoting interaction with strangers. A game of “fetch” always gave him an opportunity for a positive experience. I was full of joy watching Tulley play “fetch,” “touch,” and “hug” with as many people as I could get to work with him.

I soon began brainstorming what I had to teach Tulley to get him back to his family. Their young child was a concern. It is impossible to teach a very young child how to be responsible with a dog—especially one that will bite. So, how do you teach the dog how to be safe for a home with a child?