Before I started to work with Tulley around children, he and I needed to spend more quality time together and build a more trusting bond. He was still timid with people he didn’t know, never mind children. If someone reached out to touch him, I couldn’t trust him not to bite.

A safe and structured world for Tulley.

I started taking him to my obedience classes. Anytime we entered a setting that had anything to do with training, he worried, so I kept our sessions  short and full of rewards, praise, and fun. Encouraged, I signed him up for a basic agility class, something he had never done before. Tulley enjoyed going onto the frame, through a tunnel, and over the jumps.

During one of the classes, an instructor, Cynthia Strada, approached him. “Hi, handsome,” she said. Noticing him cower, she bent down to his level. “You’re okay,” she said, and offered him a treat.

Warily, he approached and took the treat from her hand. I showed Cindy his “touch” game, and Tulley played with her. Every week, Cindy gave Tulley extra time, attention, praise, and treats. I can’t thank her enough, because after each class with Cindy, he was more comfortable and confident. The progress was slow, but it was progress. I often wondered how far I would be able to bring him along and build his trust in people. 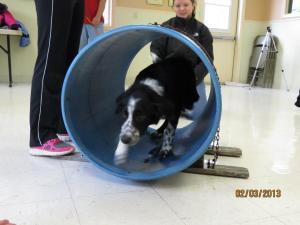 Over time, Tulley developed his own effective methods to cope with stress. Now, rather than growling or–worse yet–biting, he came to Ed or me, gave us this deer-in-the-headlight look, and pressed his head against us. He trusted us; we were his soft place to fall. We never relented in our efforts to socialize him, but were careful never to put too much pressure on him. We let him approach people on his own terms.

One day, we took him back to the farm to visit. As we parked and got out of the truck, we noticed several people standing by the fence, some of whom we and Tulley knew. Tulley took off running to say hello. One by one he greeted everyone with a wagging tail.

Suddenly Tulley bounded up to one man he didn’t know, and froze. His tail and head dropped.

I turned to Ed, “Look. Do you see how Tulley’s reacting to that stranger?”

Tulley whirled and galloped back to us with a terrified look. He ducked behind Ed and pressed against his leg.

“Is he more frightened than usual?” I asked. “You think he knows this guy?”

As we approached the group, Tulley followed timidly behind. My friend introduced Ed and me to the stranger.

Tulley cowered and trembled behind us.

The man stuck out his hand and said, “Hello. I’m the trainer who first called you about that dog!”

This entry was posted in Mean Dog. Bookmark the permalink.